Have you ever been in a place where you overheard a conversation and you said to yourself, does that sound like the person I know? You see, people are known by their actions. So sometimes, when you hear comments about someone you know, you can within reason, give that person the benefit of the doubt.

This text was part of a conversation between Abraham and God. Sodom and Gomorrah were cities that did evil in the sight of the Lord. So God decided that it was time to take action. God said, “Should I hide my plan from Abraham? For Abraham will certainly become a great and mighty nation, and all the nations of the earth will be blessed through him.”  And so God informed Abraham about His plans for Sodom and Gomorrah. Abraham didn’t say, “Good for them; they are a bunch of despicable people who are about to get what they deserve.” No! He looked to God and had a conversation about His plans for Sodom and Gomorrah.

The NLT version used the word flagrant to describe their sin. Flagrant is a word you hear used in basketball. A flagrant foul is a personal foul that involves excessive or violent contact that could injure the fouled player. There are penalties for those actions. The referees get together to determine the category of that flagrant foul. If it’s a flagrant foul 2, the player is ejected from the game. Well God assessed the lifestyle of those  cities, He determined that they had to pay a penalty. But Abraham appealed to the righteousness of God and asked Him if He would destroy the righteous with the wicked. God was willing to withhold judgment if there were some righteous people living there. Abraham started with fifty as a requirement but stopped at ten. God was willing to spare the cities for ten righteous people.

Abraham is a role model people of faith living in this season on the earth. Abraham was not in danger of destruction but he took the time to go before God on behalf of people he didn’t know. Yes, his nephew Lot lived in Sodom and Gomorrah, but he never mentioned him before God; his concern was for the entire population. I pray that we would become like Abraham and show compassion for those who stand in judgment before God. It was sad that in those cities they did not have ten righteous citizens. God is righteous and honorable. I pray that our lives are a reflection of Him so that we can bring change in the lives of those around us.

Thought for Today: Friend, let your life make a difference in the lives of others.

1 thought on “He’s a Righteous God”

© Claudette Glaude-Scott and victorywalk.blog, 2019-2023. Unauthorized use and/or duplication of this material without express and written permission from this site’s author and/or owner is strictly prohibited. Excerpts and links may be used, provided that full and clear credit is given to Claudette Glaude-Scott and victorywalk.blog with appropriate and specific direction to the original content. 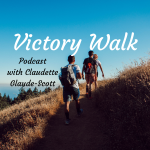